When I first heard about Batman v Superman: Dawn of Justice, I was more excited about it than I was about The Force Awakens (though that changed, of course, as TFA came closer). I wasn’t sure what to make of Ben Affleck being cast as Batman, but I thought he might do well. I was not a fan of Jesse Eisenberg being cast as Lex Luthor, but beyond that, I was expecting a good film.

Then the trailers started coming in. The first few teasers were good and only increased my excitement for the film. But it soon started to get worrying. Batman seemed to be doing things Batman shouldn’t be doing. He seemed to be showing too much emotion for my liking. Luthor was acting like an idiot. Doomsday right there in a trailer?! But I still held out hope. There have been trailers before that ill portrayed the film, and I could live with a slightly different take on Batman – every actor is going to play him differently, obviously, and I’ll never get the live action version that’s in my head anyway.

Let’s randomly start with Lex Luthor. I was completely justified in my concerns about Jesse Eisenberg’s casting. He was probably the worst thing about the film. In the three video reviews I watched yesterday of the film, he was twice referred to as being very like Jim Carey. And the more the film goes on, the more I can see why. Though he isn’t as over the top as the reviews can make him seem, there are a couple of places where he brought to mind Carey’s Riddler in Arkham Asylum at the end of Batman Forever. He is certainly a new take on the character, being borderline schizophrenic rather than insane through his megalomania. He does at least have a few decent lines regarding whether Superman is truly good. 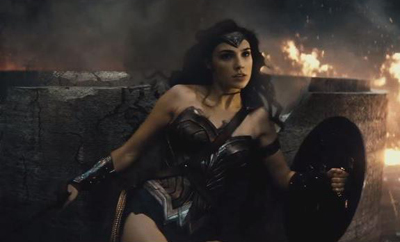 Gal Gadot was a good choice for Wonder Woman, I thought, and she gives off a sense of power and virtue. Her sudden appearance (sudden to most of the characters) towards the end of the film made me smile, yet I can see how people not entirely familiar with her character would be very confused. Why, they would muse, is Wonder Woman doing more damage to Doomsday than Superman?

Affleck did a good job as Batman. I’ve heard a lot of people say he’s the best thing about the film, but I don’t know if I would go that far. To me, he is similar to Cavill as Superman: good, but not all that remarkable. I wouldn’t like to see him replaced and I’d be happy to watch him in the role again, but his name wouldn’t roll off my tongue if I was asked who I think the best Batman is (Kevin Conroy, since you ask). I’ll come back to more of Batman in a minute.

It’s difficult to talk about the film without properly…talking about it. A lot of the issues revolve around things that are, or could be considered, spoilers. But suffice to say that one annoyance is that the trailers pretty much show us the entire film. There is very little in there that will surprise you after watching those. Which is absolutely ridiculous on the part of the marketing team. Doomsday should never have been shown in the trailers, particularly. Even Wonder Woman’s best bits are in the trailers.

Just like my ramblings, the film is all over the place and lacking in any kind of sense of consistency or substance. I don’t understand a lot of the choices, such as sitting Metropolis right next to Gotham (you literally see the Bat signal from Metropolis), or having Batman closer to the end of his career just as the Justice League begins come together. Unfortunately, a lot of it is stuff I can’t mention in a spoiler-free review (like the plot point they used for the resolution – ridiculous and too soon). The dream sequences are another particularly confusing aspect of the film, since they don’t actually seem to have any relevance to anything.

It’s as though there are multiple films playing out in one, and Snyder doesn’t know which one to point the camera at. Although for the most part the way it jumps about isn’t too confusing, there is a lot of stuff that didn’t need to be in there at all. Like the cameos from the other Justice League members. The cameos themselves are bad, the way they are done is bad, and they are utterly pointless except to show Batman and Wonder Woman that there are more metahumans out there, which isn’t necessary information for this film. Why not end the film with one of them saying something like, ‘You know, there were more videos on that drive…’ and going from there?

In the end, though, the thing that really brought the film down was Batman. Yes, you’ve heard that he’s the best part, and yes he’s very good. But he kills people. Like a moron, Snyder tried to excuse it as not murder, but just plain old manslaughter. Funnily enough, that doesn’t make it okay. As I said, I can deal with a different take on the character, but when you completely alter a fundamental aspect of that character…well, you’re a twat.

Not only does Batman kill, but he kills unnecessarily. Each and every kill could have been avoided and handled differently. At one point he even has devices that disable his enemies’ guns, so clearly some kind of brain activity is possible when it comes to thinking non-lethally. But instead, Snyder decides to take the lazy approach and just murder everyone else. And it is laziness because, at the end of the day, Batman in the comics can actually be quite profound, and that includes his reasons for not killing and his justifications for why it isn’t necessary, right, or his choice to make. Writing in good reasons why Batman still sticks to his all-important rule is so much harder than ‘oh, well, you know, he’s just tired of bad people doing bad things and stuff…’, so they simply didn’t bother.

That said, I wonder how the gentleman that Superman smashed through a brick wall at 100mph is doing.

One of the biggest aspects of Batman’s character is his iron will. And that extends to his not killing. But that’s not the only reason he doesn’t kill. It’s because he knows how close to the edge he is. He knows the darkness inside him. And he knows that if he were to go down that path, there would be no coming back; he would become everything that he has been fighting against. But no, Zack Snyder knows better, right?

Interesting question: If Batman is so happy to murder people, why is the Joker alive?

‘I decided early that I would never take a life. Right around the time I decided that I wanted to live. It wasn’t an arbitrary decision and it was more than moral. It’s about identity. As long as you can choose that, choose who you are in the world…you can choose to call yourself sane.‘ – Batman, New Earth

‘Vengeance blackens the soul, Bruce. I’ve always feared that you would become that which you fought against. You walk the edge of that abyss every night, but you haven’t fallen in and I thank heaven for that.‘ – Alfred, Mask of the Phantasm

‘If you kill a killer, the number of killers in the world remains the same.’ – Batman

My biggest issue with the film is actually that in doing the things he has done, Snyder has impacted the entire DC cinematic universe. Everything to come has to work off the template that Snyder has laid down, even if Snyder himself is gone. And he absolutely should be removed from the Justice League, in my opinion. I don’t think he, or David S Goyer, should be allowed anywhere near the DCMU again. Or any superhero film for that matter.

To me, Snyder with BvS is a lot like Frank Miller with Dark Knight Returns. I know a lot of people love that graphic novel and think it’s the ultimate Batman, but I detest it (sorry). Neither of them seem to understand or even like either Batman or Superman.

But, as I said before, at the end of the day I did enjoy the film more than I disliked it. And I think I have run out of things to say without spoilers.

If you want more Superman and Batman, here are a couple of articles I’ve written before on the subject(s):

Birth of the Superhero