Juni Lien was supposed to be a woman, not a killing machine. But perhaps for the daughter of three assassins, there was never anything else in the cards.

Juni is second-in-command of the Star Wraith, but sitting in one place is not something she’s used to, and the sense of confinement is growing when we meet her again nearly a year on from books 1 and 2. Working in a team, coming to terms with the fact that she’s in possession of feelings, having to confront herself as a person rather than drifting through life as a weapon…it may be too much. Perhaps she made a mistake in not pulling the trigger when she had Archer in her sights.

For the rest of the team, Juni is an unknown entity – a predator carefully placed among her prey, yet choosing instead to fight alongside them. She could be a valuable and fearsome ally…if she can be trusted.

The assassin will slip out of the shadows soon, in Fear of the Dark…

Arianne has done all of the art for my books since book 3, and you can find more of her work here: arianneelliott.artstation.com

One of the two main characters of the NEXUS series, I technically haven’t written a book about him for 10 years! Travis Archer is a freelance bounty hunter with just a little obsession with the idea of being a space cowboy.

Archer is half human and half Necurian, an ancient race with psionic abilities. Although Archer can use these abilities, his lacking knowledge of how to do so safely may have caused some problems, just beginning to manifest when we meet him again, a year after the events of books 1 and 2.

He is the de facto captain of the Star Wraith, having uncovered the ship’s ugly truth almost a year earlier. Plagued by nightmares about the things he has been a part of since then, he knows that it isn’t a position he deserves.

The freelancer will drift into town soon, in Fear of the Dark…

Arianne has done all of the art for my books since book 3, and you can find more of her work here: arianneelliott.artstation.com

I recently did a character interview with Mary Fan. In that, my own female protagonist, Juni, is mentioned. It made me think about how I want to get back to those characters and build her character. To show more of what’s underneath her steel shell.

Juni is strong in all sorts of ways. But her strength also hides things. Things that take a lot of digging to get to. Her strength is not just in her physical skills. It’s the strength to survive the lonely existence she’s been given. It’s the strength to abandon the security of the only life she knows and follow the new and frightening feeling of trust. It’s her strength of character. On the surface, Juni may appear to be a typical Strong Female, added for sex appeal and token equal opportunity. She’s certainly strong and appealing, but she’s far from typical. 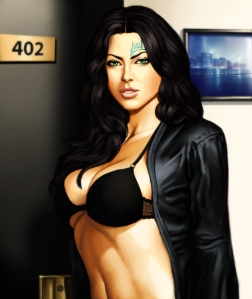 Juni Lien, using her appearance to distract Travis Archer from the knife she may introduce him to

Who better to give an opinion on the subject than Travis Archer’s interviewer, Mary Fan? Author of space opera Artificial Absolutes, she has written a female protagonist who’s more than just a Strong Female.

What is she, besides a Strong Female?

The words “strong female protagonist” always bothered me. It took me a while to pinpoint why, and the simplest way to explain it is this: it lumps every female who isn’t a wilting weakling into one category. There are so many different kinds of strengths, so many quirks and nuances to each character, and yet they all get reduced to simply a Strong Female.

What’s more, most Strong Females these days—especially in sci-fi and fantasy—are incredibly bland, and as many stereotypes are thrust upon them as the wispy princesses of yesteryear. To be a Strong Female, it’s taken for granted that she knows how to fight, that she has a perpetually tough attitude, that she’s always collected. In other words, she’s perfect. Just like her pretty-girl predecessors, except in a different way. Take away the martial arts and one-liners, and what’s left?

When I was writing Artificial Absolutes, the first thing I decided was that my protagonist, Jane, wasn’t going to be a combat-trained superwoman who always knows how to deal with whatever situation she’s in. At the beginning of the novel, she’s just an office girl with dreams of being a composer, so when she finds herself in the kind of dangerous action scene familiar to sci-fi fans, she doesn’t suddenly transform into an unflappable military cadet. She panics and screams—like most people would—and, at one point, is absentminded enough to forget her weapon, which she barely knows how to use. She does put on a tough attitude, but she also gets scared and, when tragedy strikes, cries. In spite of her fears, she does her best to be brave when faced with situations her sheltered life never prepared her for. She ultimately wants to be strong, and she holds her own through the space battles and gun chases, but I wanted her anxieties, her fears, and her weaknesses to show as much as her dogged determination.

As for violence, well, the fighting sexpot has become a well-known cliché of the spec fic universe. Nothing wrong with being both attractive and combat-trained, but again, strip away the perfectly choreographed kung fu scenes, and who’s there? Not to mention, violence is often too glorified in action stories, where no one seems to care about all the bystanders in the building Superman knocked down. When it comes to Strong Females, it’s practically fetishized—she’s expected to fire two guns at once in a skin-tight outfit and needle-sharp heels. There is plenty of violence in Artificial Absolutes—it’s an action book, after all—but not just for the sake of pretty explosions. Most of Jane’s scenes of violence are against drones, where she’s unafraid to let the shots ring out because she knows she’s fighting a lifeless bot. There are a few moments when she gets physical against a person, but those are due to a blind rage she hasn’t yet learned to control. They’re more flaws, not assets.

I’ve gotten mixed reactions to this character, with all her flaws. Some people love that she’s a person first and a sci-fi heroine second. Others don’t enjoy her as much because she does act like most young people trying to figure out their lives, which means she argues and complains—although, to her credit, she always takes action to fix whatever’s bothering her. But love her or hate her, if you took away the space opera, she’d still be a human being, not an action figure.

Mary on Amazon UK and US