You may once again be forgiven for thinking that I might have finally succumbed to the enticing pull of the hereafter. But I haven’t. I just haven’t written anything. Which is different.

After writing about too much Star Wars, I ran out of things to write about. Infinity War? Iron Man and Captain America will die. And Loki. Cyberpunk 2077? We’ll see it at E3. And…done.

If you’re in need of any more Hero’s guides, let me know. God forbid you find yourself out in the deep blue sea, surrounded by super-intelligent sharks that can swim backwards and you haven’t read a guide on how to handle the situation.

In terms of proper writing, I have just crossed the 85,000-word mark of my fifth novel today. Which will, when released be my sixth. And it will be book five of the NEXUS series. Yes.

If you read my books and can count, you may wonder what happened to book four (which should be my fifth novel but will actually be my sixth, except in terms of release, in which case it will indeed be my fifth. Just to clarify). I haven’t written it. My books do have slightly different tones, and some are too different to write from the same mindset. These two, to, have two too different tones. It’s true. So I’ve been unable to get myself in the right mood to write book four, but book five has been going fine. It is, if you are curious, taking a pinch of the noir from my thriller, Acts of Violence, and adding it into the mix. Not so much as to bring it out of the NEXUS series, but enough that I can’t write it and a lighter, more space opera-ish one at the same time (which is entirely in the style of Blades).

Aside from this I have been doing entirely pointless things like painting garden statues. I walked into Homebase just after Christmas and came face to face with a load of Star Wars characters. Naturally, I thought: I should paint those. So I did. Well, I (badly) painted Yoda and R2 and then lost the urge. 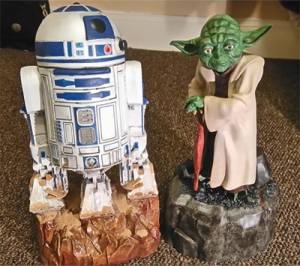 Then I decided to sculpt stuff out of polymer clay, which is the natural progression of painting polystone garden statues. I made Superman. Kind of. I am now working on a full figure of the main character of my current book. So if it looks wrong…well, it’s you who’s wrong. It’s going okay, except that I have no idea what I’m doing. 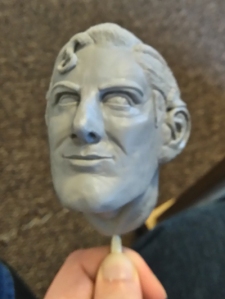 I also have a three-legged cat now. His name is Hop.

No doubt Thanos will demand that I return to say I told you so when dust is bitten, but hopefully I’ll think of something to say before then. So…bye. Bye then.