Today, I am hosting an author interview as part of an ‘All Authors Blog Blitz’, started on Goodreads. My own will be hosted by Patti Lavell. My guest is Max E. Stone, a thriller writer. So…here he is, I guess (just pretend there’s trumpets and things):

Let’s start with the obvious: tell us about your book, August To Life.

“August to Life” is the story of three families—the Warrens, the Bennetts, and the Johnsons—unwittingly and reluctantly thrown together by their children which forces them to deal with the secrets they’ve buried for years. And that’s just the beginning.

What led you to write in this genre? Would you consider venturing into other genres, and if so, which?

I’ve always enjoyed reading fiction and writing it is no exception. It’s an escape for me and gives me an opportunity to create something new. For instance, “August to Life” was the result of a series of traumatic incidents during my junior and senior high school years. During that time, escaping through fiction writing was all I really had to keep me sane. As far as other genre’s I would like to at some point do paranormal and maybe children’s books.

Thriller and mystery works seem to me some of the hardest fiction to write, with all the interconnecting threads and so on. How do you go about it?

You’re right. It’s not an easy genre at all because there are so many different threads of storyline that you have to clearly connect to create this yarn of one interwoven story and then you have to show the audience how its all connected. It took me years of practice with writing prompts, reading, agent rejection letters, and the like to have an idea of how to do it and even now, I learn something new every time I pick up a book by another author.

What kind of challenges did you come across in bringing this book to life?

Writing in a way that scared me was one of the most challenging aspects of bringing this to life. My mom, one of the smartest people and biggest book lovers I know, taught me that. I always let her read my drafts. I let her read the first draft of “August to Life” and she commented on how dialogue should go with the character at least in the context of the moment. From then on, I had to make sure I said what my character said, regardless of my feelings.

Another challenge was publishing. I didn’t know much about the self-publishing industry or publishing in general, which is another place my mother shined. She found all these details and information about publishing with Amazon and Smashwords. It helped me to get my voice heard so thanks mom 🙂

What lessons have you learned so far from your writing?

One lesson I learned was not to be afraid to be me. Sometimes what works for someone else may not work for you. For example, Donna Summer and Giorgio Moroder were just two people who changed the face of music simply by doing what they did best: being themselves. My writing role model is Quentin Tarantino. He’s not afraid to say what needs to be said the way it needs to be said. His structure and dialogue is phenomenal.

If you knew everything you know now about writing, what, if anything, would you go back and do differently?

There are a few things, but mainly I would definitely read more of a wider range of authors both in and outside of fiction to see their different styles and tactics of reaching an audience and telling a story.

I’m pretty sure it was Elmore Leonard that said (but don’t quote me) that writer’s block is just another term for lazy. What do you think of that? Have you ever had writer’s block? If so, how do you get around it?

Well, I’ve never really considered it before. I have suffered from writer’s block before so I would have to both agree and disagree. You’re never truly blocked just because you don’t know where to go. Sometimes you just need to write or talk it out to get back on track.

Lastly, tell us anything else you want us to know: coming projects, tips, interesting facts about yourself… Anything.

“August to Life” is part of a series so you’ll be seeing more of the Warrens, the Bennetts, and Johnsons. The second in the series “The Bleeding” is a hard core thriller that goes into why one character is what he is and what he is planning next (if anything.) It will be available September 2013 and I will be posting updates and changes on twitter on my pages at @maxestone and @maxestonebooks as well as my blog “The Coloured Blog” on Tumblr at http://thecolouredbook.tumblr.com/ 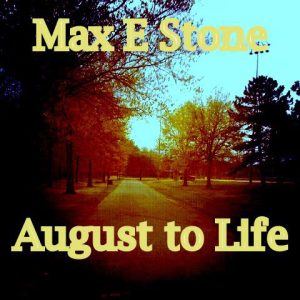 ‘Around, Around, and Around they go. Where the blood stops?…Who knows?’

August to Life is available from Amazon UK and Amazon US now.