The cameras are on and the gloves are off in this battle of the sexes in space.

Say hello to Robin and Joe—contestants in 2034’s “Space Games,” a high-stakes reality TV show from Hollywood producer Sheldon J. Zimmer set aboard next-generation space station, ISS 2. The winner takes home a multimillion-dollar jackpot and a chance at stardom, while the loser faces the ultimate in public humiliation. Only former NASA astronaut Vince, acting as the station’s commander and the games’ sole referee, can separate sexy spitfire and martial artist, Robin Miller, from her brutal opponent, “Big Joe” O’Donnell, as the pair compete inside the cramped zero-g environs. Watched by millions of people back on Earth, the reality show rapidly degenerates into a deadly spectacle.

Space Games is a compelling story and a biting satire about reality television: those who make and participate in it – and those who watch it.

In the video, a woman jogged down a palmetto-lined street. As she neared the camera’s lens, the recorder refocused, compensating for her approach, framing her from the waist up. She sprang past, moving off-camera from right to left.

A new perspective: The cameraman had caught up and he was in front of her now, backpedaling. The picture on the monitor shook and became unwatchable until the woman slowed and began to run in place.

“My name is Robin Miller. I’m twenty-six and I’m the softball coach for the University of Cal-Irvine.”

“I knew it,” said Sheldon Zimmer as he and his assistant watched the TV monitor inside Zimmer’s Los Angeles home. “California girl. History of softball. Gotta be one of those . . . you know.”

“Not exactly,” Morty answered. “Listen to what she says.”

The woman on the screen was undoubtedly attractive. Though her halter-top and hair were darkened with sweat, and the sheen of perspiration covered her face and limbs, she had a pureness about her. Maybe it was the way her ponytail bounced behind her as she ran, or the clusters of freckles on her nose and cheeks. Or maybe it was the slender physicality, her overheated panting as she continued to jog in place.

“I want to be on the TV show ‘Space Games’ because I’ve always been . . . I don’t know . . . daring . . . competitive. My girls at UC-Irvine won the College World Series last season and instead of going to Disneyworld, I’m going into space to kick some guy’s ass.”

“That seals it,” said Zimmer, the show’s director and executive producer. “She definitely is one. Hot, though.”

“Uh-huh.” Morty pointed toward the screen. “We’re almost to the part about her parents.”

In the next cut, the woman punched a sparring bag, her gloved fists denting the vinyl surface. She followed by snapping a series of violent roundhouse kicks.

Another roundhouse kick, just a blur.

“I know,” Morty replied. “Very athletic, energetic. That’s one thing to her advantage, especially in space.”

“No—I mean angry. Reminds me of Kat Turner, remember her, Morty? With the right guy we could have a ‘War of the Roses’ in outer space.”

“That’s what I wanted to talk to you about, Shel. It’s a reality show, not an old-style black comedy. Tragic endings aren’t what we want, and our two contestants are going to have their hands full already, dealing with all the physical, mental and emotional strains of—”

“Too much conflict isn’t good, either,” Morty said. “Shel, I vote against this candidate. I didn’t even want to show you her tape. She doesn’t fit the profile provided by the NASA consultants. For legal reasons, I’d—”

“Fuck the NASA consultants! What do they know about television?”

Now the young woman was relaxing on a couch. She stretched forward to paint a toenail.

Morty gestured toward the screen. “Here it is. Check out this part.”

“My parents trained together at NASA. My mom’s from California, Dad’s from Des Moines. They met during training, and then fell in love during their joint mission aboard the International Space Station.”

“Why is she telling us this?” Zimmer complained. “Why do I care about this shit?”

The woman flexed her toes, leaning forward to inspect the drying polish. Then she looked up into the camera and smiled. “My mom used to tell me I was conceived up there.” She pointed to the sky. “Aboard the space station . . . the first ISS.”

Zimmer blinked. Then he glanced at Morty. “What’s her name again?”

“The NASA recommendation,” Morty reminded. “They interviewed her . . . did a thorough background check . . . they advised us that our top-two choices were not compatible.” Morty tried to remain calm. “Shel, let’s play it safe here—while we may know television, NASA knows space and its psychology. It’s unknown territory for us.”

“I know a great story when I see one, Morty—now get Big Joe back on so I can have one last look before I sign his ass, too.”

Dean Lombardo works as a writer in the information technology industry, turning what is often techno-babble into messaging that can be understood by a general business audience. At age 11, he was psychologically scarred by the movie “Alien” and has been watching, reading and writing frightening science fiction and horror ever since.

Dean lives in northern Virginia with his family and the world’s most beautiful yellow Labrador Retriever, Trixie.

Space Games is available in both paperback and e-formats, in the following outlets (plus many more):

Kindle UK and US

Paperback UK and US

In all e-formats from Smashwords 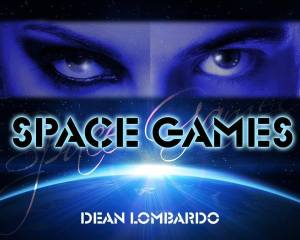 A Science Fiction Horror novel released by Active Bladder in August 2007. Something terrible is hatching. The victims are all the same. Snatched from their homes and then buried alive, only to be found days later, dead, and completely stripped of their organs and flesh. The police and media suspect a serial killer, but the feds know otherwise and call on Tom Goodman, an expert in the biological control of invasive species. Something far more terrible than a human hand or rogue bear is at work in this small town besieged by death, and Goodman must figure out a way to exterminate the invader before it exterminates him and everyone around him. But to defeat the creature, Goodman must better understand it…and get inside its head before it gets inside of his.

Find all e-formats on Smashwords.