The small bits of Star Wars: The Last Jedi artwork that we’ve seen have got people talking again – as though anyone needed an excuse to talk about Star Wars. Who is/are the last Jedi? Who are Rey’s parents? What is the connection between her and Kylo Ren? Why the hell did R2 magically wake up for no reason at all?

The most popular theory seems to be that Rey is Luke Skywalker’s daughter. I’m in two minds about whether I like the idea of the galaxy revolving around the Skywalker family, but if she is to be a Skywalker, I’d rather it was maternal. In the no-longer-canon Expanded Universe, Han and Leia have twins (and a third child, but who cares about him?): Jaina and Jacen Solo. 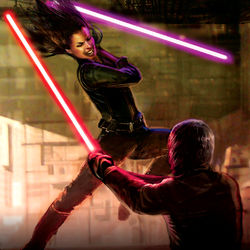 Jacen turns to the dark side, while Jaina remains in the light, so Kylo and Rey taking an approximation of these roles would be a decent nod to this. Plus, Jacen kills Luke’s wife, which would add to the justification of Luke running off to sulk in the films.

The downside to this is that there’s little likelihood that Han wouldn’t know that Rey is his daughter. Sure, they could have been split up like Luke and Leia, but there would have been no reason to do that, or to keep her secret from Han. Plus she was around six-ish when she was dumped on Jakku – though this is probably about the right age to hide her to keep her safe from Kylo and Snoke.

Failing this, I’d quite like her to be Obi-Wan Kenobi’s granddaughter. His relationship with Satine in The Clone Wars is canon, so it’s a vague possibility. The downside to this is it still leaves room for the absurd Rey/Kylo romance people seem so desperate for.

As for The Last Jedi, we seem to have confirmation that it is meant as a plural. It’s possible that the foreign language versions were simply translated as plural but not actually told that it was, so I’m not taking it as a fact. But it seems likely. Even if Luke is the last at the beginning of the film, if he trains Rey to be a Jedi, there would be two of them by the end. But, given that Snoke is supposedly an ancient being, is it plausible that he was at some point a Jedi? Could The Last Jedi refer to Luke and Snoke? (No, I do not in any way count Leia as a contender.)

And who’s to say Rey will become a Jedi anyway? Perhaps the old ideas of Jedi and Sith are over, at least for a time. It would be interesting to see her become a balance of light and dark, rather than the extreme of either. This is a concept used in the Dawn of the Jedi graphic novel, and it would be interesting to explore beyond just the realms of Jedi = light side and Sith = dark side.

What do you think about these questions? Who is Rey? Who is Snoke? And seriously, were they that lazy at writing that R2 has no actual reason for waking up?! Will Benicio Del Toro be Boba Fett’s son?