Writers can get people into and out of trouble with a handful of eloquent words and some convenient coincidences. It’s no wonder then that we are the first people you turn to for advice on how not to die and stuff. With this in mind, I have decided to take on the heavy burden of writing some guides for that very purpose – to save lives!

Disclaimer: Following these guidelines may result in death.

Next up on the list of things you, the Hero, may get into trouble with is the icy wrath of the mountain. 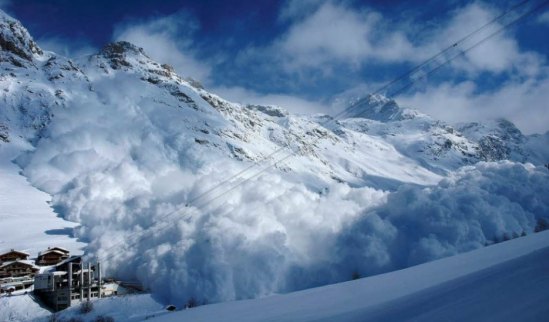 It’s just one of those freak occurrences: You’re out for a leisurely stroll through a supervillain’s mountaintop laboratory – where he/she/it is experimenting on kidnapped homeless people and puppies – planting explosives willy and perhaps nilly, when one of the seemingly infinite supply of henchmen (or henchwomen, if the supervillain is a fan of equal opportunity) spots you. A frantic shootout takes you back through the sterile white corridors – a sure sign of evil – to the exit and a convenient pair of skis and, finally, a heroic escape down the glittering alabaster slopes. But (dun dun DUNNN), the henchindividuals are on your heels, shooting at you and throwing grenades in flagrant disregard for the hazard signs; but that’s okay, because you still have that detonator in your hand. Inevitably, the mountain roars and angrily vomits at you in response.

So with a million tonnes of snow barrelling down the mountain behind you at over 100mph, how do you intend to not die? By being intimately familiar with the Hero’s Handbook of Mountaineering, of course (in which case you’ll know that the sound of those grenades didn’t cause the avalanche – that’s a myth). Failing that… 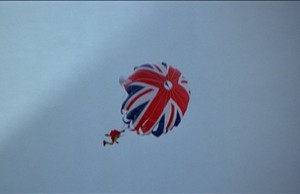 Note 1: Pull your parachute and use your momentum to glide to safety. Do so before the wind pushed ahead of the avalanche reaches you or it will cause complications. If said parachute has your country’s flag printed on it, get +2 to your speed modifier.

Note 2: If you don’t have a parachute, determine what kind of avalanche is it. Dry snow or wet snow? Wet snow avalanches will travel much slower – perhaps 20mph. The good news is, you can ski at around three times this speed, so you should be able to outrun the avalanche. Do so at an angle to get out of its path. The bad news is, as the Hero, it will be a dry snow avalanche chasing you. These average at about 80mph, but can reach speeds of over 100mph. You will not outrun it. While you have (very limited) time, you could try skiing to the side, but the avalanche could be extremely wide.

Note 3: If you have equipment with you, such as a snowmobile and even your skis, discard and move to the side of it so it doesn’t kill you and to minimise the weight pulling you under the snow. Sherpas do not count as equipment – do not discard. Unless you are ten feet from entering woodland and the avalanche is still way up the top of the mountain, don’t try to make for the trees – better to be prepared for the avalanche hitting you than for its speed to catch you by surprise.

Note 4: A fast-moving avalanche will push hurricane-force winds ahead of it, so be prepared to get hit before the snow actually reaches you. Don’t try to take cover behind rocks, trees, or vehicles – not only will the power of the avalanche almost certainly simply crush you with your choice of cover, but anything of that kind could cause some degree of slowing of the snow around it, and therefore cause it to pile up deeper over you. That said, if you can position yourself downhill from a tree, it may just protect you from some of the larger debris carried in and ahead of the avalanche. Alternatively, it may add to that debris and crush you. In the latter case, attempt a Michael Bay style snow-motion scene where it flies over your head, narrowly missing you.

Note 5: You are about to be enveloped by snow. The good new is you might get hit by debris first and die quickly. The bad new is it’s going to be loud, frightening, confusing, and painful. Crouch low, perhaps on your side to avoid being thrown like a rag doll, facing away from the incoming tidal wave of death, and cover your nose and mouth. Keep your mouth closed lest snow inappropriately invade your person.

As the slow builds up over you, move you arms to a position over and in front of your face to create an air pocket. Take a deep breath as the snow settles in around you, so as to give your torso some breathing room. Once the snow has covered you and doesn’t seem to be moving too much around you, extend your arm upwards. If you are near the surface, this will make it easier for someone to find you, and will give you a better chance of pulling yourself towards the surface.

Note 6: Now that the snow has covered you, waste no time in starting to dig yourself out. Don’t wait for it to stop moving – once it stops and starts to properly settle, there will be very little you can do to save yourself. If you still have that magical katana blessed by the gods, use it to melt the snow around you and carve your way out. Otherwise, if the snow is loose enough, trying ‘swimming’ out. Spitting is one way you can determine which way is up, and also a filthy habit. You are unlikely to have any light, so you may have to spit on your own face to see which way it runs. Don’t mention this part in later heroic tales.

Note 7: If you cannot reach the surface before the snow sets, your goose is cooked, your bucket is kicked, your dust is bitten, and your chips are being cashed in. Breathe as normally and as calmly as you can and pray. At least you died a conquering Hero. Unless the supervillain got away or you forgot to evacuate all the homeless people and puppies, in which case perhaps this is better than returning a failure.

Of course, if you earlier had a blazing row with your sidekick, now is when he or she will plunge his or her hand into the snow and pull you out with no indication as to how the hell he or she found you or got to you in time but who cares.

Note 8: Honestly, you’re probably dead at this point (RIP), but if not, yay. Being the Hero that you are, you probably dragged yourself through the quickly setting snow and burst through the surface layer just as it became like concrete around your ribcage. As soon as you feel fresh air on your face, you can start heroically and gruffly calling for rescue (don’t do this if you are still buried, as the snow will muffle the sound and you’ll waste your air). Again, the idea of noise causing avalanches is a myth, so don’t worry about that. Unless you’re in a film.

Note 9: If you were not alone when the avalanche hit, you’d better get to rescuing. Ignore the henchpeople who shot at you – they quite literally brought this on themselves. It will be difficult to pinpoint the last place you saw your companion/s, as the landscape will have changed and you’ll have no idea how far you have been moved by the snow. However, do your best to gauge where they were last and carefully work your way just downhill of that spot. Look for their equipment, as they will almost certainly be in line with it.

Note 10: If you don’t both have probes and transceivers, chances are you won’t find your chum, but at least you kind of tried. Then again, using your powers of heroism, you will probably happen to dig in just the right place. If you can hear them, dig frantically – just below them and in towards them rather than on top of them and straight down – throwing the snow downhill. If you can’t, it means they are buried too deep. Or dead. Or somewhere else. In this case, dig quickly but steadily, expending as little energy as you can so that you can dig further before collapsing of exhaustion – this will be about the same time as you uncover their face and one of you delivers a witty one-liner. Be careful not to accidentally kill them with your shovel.

Once everyone is pulled from the snow/left for dead, carefully make your way sideways and off the settling avalanche, avoiding ambush by Yetis. Seek some kind of rescue type people if you want or need, or stumble across a secret mountain civilization and learn the secrets of immortality and kung fu.

Congratulations: The cold superiority of the mountain has been sneered at; its million tonnes of snow and ice are nothing compared to your foetal position head sheltering. You lived to tell the tale, reluctantly, to the younger generation who speak in whispered tones of your heroic exploits. And you’ll think twice about skiing again.

Next time on A Writer’s Guide…another thing!

One response to “A Writer’s Guide to…Surviving an Avalanche!”